Steri-Clean specializes in the removal and disinfection of areas affected by pigeons, rats, mice, cockroaches and other rodents and/or insects that unfortunately often take residence in our homes and businesses. We are one of the only companies in the nation offering rat, mouse, pigeon and other rodent droppings removal with disinfection. There are dozens of diseases that can be found in these droppings (see chart below). Most of the time the threat is exaggerated, but in certain cases, there is a real danger through direct contact or simply by breathing the air in these contaminated environments. Steri-Clean can quickly and effectively remove all droppings and any dead rodents, as well as apply the appropriate disinfectant to the involved areas. Unfortunately, even when rodents are exterminated, their scent remains which attracts other rodents to take their place. These areas must be thoroughly cleaned, disinfected and sealed to prevent an ongoing infestation. From attics to basements and garages, there are no areas of a home or business that we can't completely clean and disinfect. Call for an in home assessment and estimate.

Pigeon and Bird Proofing - Steri-Clean is an authorized installer for Bird-B-Gone Products, and all bird and pigeon proofing products. If you have any issues with pigeons, bats, owls, or any other birds, let us know. We can install netting, wire, spikes, and other bird preventers...whatever you need, we can do. We will bird proof the area to prevent it from becoming an issue ever again! One call can get your property cleaned, disinfected, and completely bird-proofed. 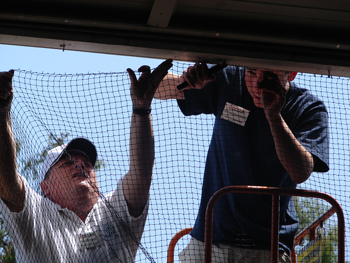 Often times a pigeons nest or roost is the area of biggest concern. Over several years pigeon droppings can accumulate and bacteria as well as parasites can be present. Even if the droppings are dried over long periods of time the danger is still present. Diseases can be contagious through the air or direct contact. Caution should be used when around areas with heavy droppings, especially in a poorly ventilated areas such as attics. The photos to the right show typical pigeon and rat infestations. Signs to look for if you think you have a problem are:

Walls and pipes where rats and mice frequently travel will have a dirty brown oily coat on them.

You will often find small gnaw marks on just about anything, especially food containers and packaging.

Pigeons usually will perch on the highest point of a home or business.

Nests/roosts can be large or small.

Histoplasmosis is caused by a fungus (Histoplasma capsulatum) found primarily in the areas drained by the Mississippi and Ohio rivers. Both humans and animals can be affected. The disease is transmitted to humans by airborne fungus spores from soil contaminated by pigeon and starling droppings (as well as from the droppings of other birds and bats). The soil under a roost usually has to have been enriched by droppings for two years or more for the disease organism to reach significant levels. Although almost always associated with soil, the fungus has been found in droppings (particularly from bats) alone, such as in an attic.

Infection occurs when spores, carried by the air are inhaled — especially after a roost has been disturbed. Most infections are mild and produce either no symptoms or a minor influenza- like illness. On occasion, the disease can cause high fever, blood abnormalities, pneumonia and even death. In some areas, including portions of Illinois, up to 80 percent of the population show evidence of previous infection. Outbreaks of histoplasmosis have occurred in Central Illinois.

The National Institutes of Health (NIH) has reported a potentially blinding eye condition — presumed ocular histoplasmosis syndrome (OHS) — that probably results from the fungus. NIH estimates that 4 percent of those exposed to the disease are at risk of developing OHS.

Pigeon droppings appear to be the most important source of the disease fungus Cryptococcus neoformans in the environment. The fungus is typically found in accumulations of droppings around roosting and nesting sites, for example, attics, cupolas, ledges and water towers. It has been found in as many as 84 percent of samples taken from old roosts. Even when old and dry, bird droppings can be a significant source of infection.

Like histoplasmosis, most cryptococcosis infections are mild and may be without symptoms. Persons with weakened immune systems, however, are more susceptible to infection. The disease is acquired by inhaling the yeast-like cells of the organism. Two forms of cryptococcosis occur in humans. The generalized form begins with a lung infection and spreads to other areas of the body, particularly the central nervous system, and is usually fatal unless treated. The cutaneous (skin) form is characterized by acne-like skin eruptions or ulcers with nodules just under the skin. The cutaneous form is very rare, however, without generalized (systemic) disease. Outbreaks (multiple cases at a location) of cryptococcosis infections have not been documented.

A yeast or fungus infection spread by pigeons. The disease affects the skin, the mouth, the respiratory system, the intestines and the urogenital tract, especially the vagina. It is a growing problem for women, causing itching, pain and discharge.

An inflammation of the nervous system, usually causes drowsiness, headache and fever. It may even result in paralysis, coma or death. St. Louis encephalitis occurs in all age groups, but is especially fatal to persons over age 60. The disease is spread by mosquitoes which have fed on infected house sparrow, pigeons and house finches carrying the Group B virus responsible for St. Louis encephalitis.

Often occurs as "food poisoning" and can be traced to pigeons, starlings and sparrows. The disease bacteria are found in bird droppings; dust from droppings can be sucked through ventilators and air conditioners, contaminating food and cooking surfaces in restaurants, homes and food processing plants.

Cattle carry E. coli 0157:H7. When birds peck on cow manure, the E. coli go right through the birds and the bird droppings can land on or in a food or water supply. Besides being direct carriers of disease, nuisance birds are frequently associated with over 50 kinds of ectoparasites, which can work their way throughout structures to infest and bite humans. About two-thirds of these pests may be detrimental to the general health and well-being of humans and domestic animals. The rest are considered nuisance or incidental pests. A few examples of ectoparasites include:

(Cimex lectularius) may consume up to five times their own weight in blood drawn from hosts which include humans and some domestic animals. In any extreme condition, victims may become weak and anemic. Pigeons, starlings and house sparrows are known to carry bed bugs.

(Dermanyssus gallinae) are known carriers of encephalitis and may also cause fowl mite dermatitis and acariasis. While they subsist on blood drawn from a variety of birds, they may also attack humans. They have been found on pigeons, starlings and house sparrows.

(Tenebrio molitor), perhaps the most common beetle parasites of people in the United States, live in pigeon nests. It is found in grain or grain products, often winding up in breakfast cereals, and may cause intestinal canthariasis and hymenolespiasis.